The deep connection many of us share with Naruto, has led to the high demand for Naruto merchandise. You can find countless Naruto products online, from Naruto themed apparel to coffee mugs. However, it can be challenging to decide what and where to buy from. We’ve found what we believe are 3 must have Naruto products from the best online anime merchandise store.

Our 3 Naruto merch recommendations include Naruto apparel found at  Anime Is Luv, an online anime shop with over 1200 anime products. They offer free worldwide shipping, and relatively inexpensive merchandise. Besides Naruto products, they offer over 12 other anime series merch. 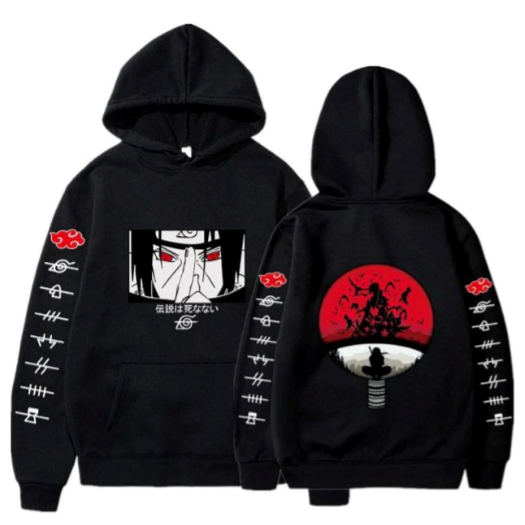 Despite only appearing in 24 of the 500 episodes in Naruto Shippuden, Itachi Uchiha is one of the most popular characters in anime. Most would think that a character with more dialogue and development would be more popular, yet Itachi repeatedly is a fan favorite.

It is likely due to his techniques, abilities, and connection to the overall Naruto plot, that many people consider him a top rank ninja and favorite character. We believe that the Itachi Uchiha hoodie from Anime Is Luv is a must have for fans of Naruto.

On the front of the hoodie is Itachi performing a hand seal, it also features his Sharingan. According to Kakashi, Itachi’s hand seals were so fast that even the Sharingan could not follow them. The hoodie’s sleeves feature the Akatsuki symbol and the rogue ninja village symbols.

On the back of the hoodie there is a powerful graphic of the Uchiha Clan crest. On the crest is the iconic image of Itachi sitting atop the pole from when he massacred his clan. The graphic also showcases Itachi in his Akatsuki cloak and his crows.

Made of soft and comfortable materials, this Itachi & Akatsuki inspired Naruto hoodie is certainly worth checking out. 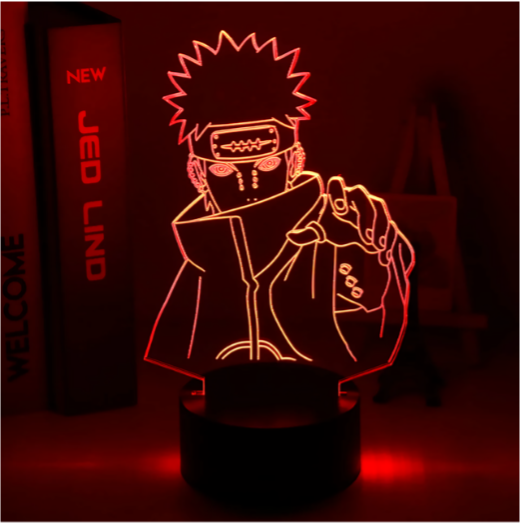 Nagato, who was known as Pain while leading the Akatsuki, is nothing short of a remarkable character. Fans had the pleasure of watching Nagato grow up into Pain. Many fans formed a deep connection with Pain’s suffering and sympathized with his questionable actions.

However, Pain is not exactly a hero in Naruto. After killing his caretaker and master, Jiraiya, fans were left in a stoop with how to feel about his character. It was only moments before his death that fans were able to understand Pains philosophies and determine he was a good person at his core.

Anime Is Luv offers an outstanding 3D LED light featuring Pain. The light showcases Pains Jutsu, “Shinra Tensei”, or more commonly known as “Almighty Push”. Pains Jutsu is said to be an ultimate defense, only used by Shinobi who can manipulate the five nature transformations and possess the Rinnegan. This Jutsu creates an unimaginably repulsive force used to push everything away from its user. Pain was able to obliterate the entirety of the Hidden Leaf Village with his “Almighty Push” Jutsu.

If you feel your bedroom or study room is boring, this 3D LED will certainly add to the atmosphere. The light is made of high-quality LEDs, capable of displaying over 15 colors with light modes such as strobe & fade. Customers have the choice between a remote-controlled option and off/on button option. If you’re looking to support Naruto or display your appreciation for the series subtly, the Akatsuki beanie is the perfect product. The beanie won’t draw the attention of those who don’t watch Naruto, however, will certainly catch the eyes of those who do.

The beanie features the Akatsuki cloud symbol. The red cloud symbolizes the blood shed that feel upon Amegakure during Nagato’s childhood. The cloud is also the symbol which all Akatsuki members wear on their cloaks.

The Akatsuki were a group of rogue shinobi, who over the course of several decades sought out to make the world a better place in twisted, subversive ways.

The founding members of the Akatsuki were Nagato, Yahiko and Konan. Throughout Naruto Shippuden, other members included Itachi, Kisame, Deidara, Hidan, Kakuzu and Sasori.

Beneath the Akatsuki beanie’s simple design, is the heavy weight of the stories, ideologies, and legends which the Akatsuki were responsible for. Made of soft wool, this Naruto themed beanie is certainly worth a look and won’t leave you disappointed.

The three mentioned Naruto products are what we believe Naruto fans would love to own. However, if you’d like to see what other Naruto merchandise is available, Anime Is Luv offers over 200 other Naruto products. Without a doubt, you’ll find something you like.

Other products that are found at Anime Is Luv are t-shirts, artwork, keychains, rings, and several other accessories. They have other anime collections such as Hunter X Hunter, Attack on Titan, One Piece, Tokyo Revengers, Demon Slayer, Jujutsu Kaisen and more!

You may use a variety of payment methods such as Master Card, PayPal, Apple Pay, and even Bitcoin to pay for your merchandise.

Anime Is Luv offers free worldwide shipping, and their merch won’t break the bank. Whether you are a long time Naruto fan, or have just started the series, the Naruto Collection at Anime Is Luv won’t disappoint. Nowadays, streaming is one of the main ways of entertainment across the globe. Regardless of your age and gender, you will always have that one anime you can watch over and over again, even as you grow old. TV streaming has made a massive impact in the lives of many up until now. From Naruto to Hunter x Hunter, anime series and movies have played a huge part in everyone’s childhood and adolescence. Truth be told, even grown-ups enjoy watching anime because aside from the incredible visuals, there are usually moral stories that people of all ages can relate to, whether it’s about family, friends, career, or love.

In this article, you will find ten must-watch anime shows of all time that are available on major streaming services right now, such as Disney Plus and Sling TV. Let’s begin!

If you decide to start watching One Piece, be prepared for it to become a long-term commitment. There are non-fans who might be put off by this very long series, but it’s a fascinating journey worth your time to follow Luffy’s quest to become the Pirate King.

My Hero Academia (MHA) focuses on Izuku Midoriya, a hero without powers in a world full of people with talents. MHA challenges Midoriya’s traditional hero’s journey by presenting a new twist on well-worn clichés, examining what it means to be a hero with humor, emotion, and stunning action sequences.

In a post-apocalyptic world, humans are forced to seek refuge behind fortified cities to avoid being eaten alive by gigantic flesh-eating titans. There’s so much to love about this series, from the intricate world-building to the surprising turns in the plot.

Anime fan or not, Full Metal Alchemist: Brotherhood is a great anime series to watch, especially if you’re into family drama, political tension, or just a lighthearted show. It’s definitely one of the best shonen anime out there.

This anime series revolves around Gon’s journey to become a hunter. As he embarks on his exciting adventure, he discovers that there’s more to the world than he had previously imagined. While many people are put off due to the length of this show, we highly recommend you give it a try before backing out.

Admit it; even if you’re not a fan of anime, you’ve probably heard of Naruto or even watched a couple of episodes of it. This long-running anime played a massive part in many families. Initially centered on Naruto’s quest to become a Hokage, it swiftly shifts to political intrigue, violence, and some of anime’s saddest villains. It’s a definite must-watch for everyone.

Tanjiro Kamado and his journey to save his demon-transformed sister, Nezuko, isn’t Weekly Shonen Jump’s most unique action series. Still, it hits all the genre’s most likable cliches with excellent artistry. The Taisho era backdrop is excellent, the characters are likable, and the animation is superb.

Action/romance series Sword Art Online takes place in a virtual world where players die in real life when their HP reaches 0 in the virtual gaming world. Kirito is a lone player who appears unconcerned by SAO’s dangers but is nonetheless haunted by the memories of a violent party that has tormented him for years.

In Baki, the hyper-masculine legends portray a typical scenario of a young fighter attempting to outdo his father to become a better martial artist. This shonen features some of the most thrilling fight scenes you’ve ever seen.

As with any season of JJBA, the stakes rise as Jolyne develops unique supernatural talents while being chased by villains and would-be hitmen. David Production has translated Araki’s quirky graphic style and stories to animation in methods that respect and improve the source material.

Regardless if you’re a long-time anime fan or just testing the waters, we highly recommend you check out these classic anime series that will surely ignite your desire to watch more anime films. Call your friends or siblings, and begin your anime binge-watching now!